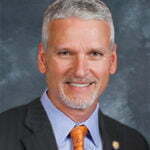 Juvenile suspects who complete diversion programs could expunge their criminal records, including nonforcible felonies, under a measure that is making its way through the Legislature.

The Senate Criminal Justice Committee voted 9-0 on November 2 to approve SB 342 by Sen. Keith Perry, R-Gainesville. An identical measure, HB 195 by Rep. David Smith, R-Winter Springs, has yet to receive a hearing.

Perry sponsored a similar measure, SB 274, earlier this year that cleared both chambers without a negative vote.

“The unfettered ability to expunge serious felonies, including sexual battery, from a juvenile’s record may have negative impacts on public safety,” DeSantis said in his veto message.

Perry said the latest version has been slightly revised to make it clear that it would not apply to juveniles who commit violent crimes.

“There were concerns last session about certain offenses that could qualify, ostensibly,” Perry said. “We have excluded forcible felonies, otherwise the bill is the same as last year.”

The latest attempt marks the fourth time Perry has attempted to pass the bill. Advocates say it would give juveniles a strong incentive to turn their lives around and allow them to avoid a felony record that can pose a lifelong barrier to housing, higher education, and professional careers.

SB 342 would expand an existing law that allows juveniles who complete diversion programs to expunge first-time misdemeanor arrests by also including “a felony offense other than a forcible felony as defined in s. 35 776.08.”

A staff analysis estimates that 2,770 juveniles were referred to diversion programs for felony offenses in FY 2019-20.

The measure would also allow juveniles to lawfully deny, or fail to acknowledge, that they participated in a diversion program and expunged their criminal record.

The measure is supported by the Florida Association of Criminal Defense Lawyers and a handful of civil rights and social reform groups, including the Southern Poverty Law Center and the League of Women Voters.

The measure is filed for the 60-day legislative session that convenes January 11. It would take effect July 1, 2022.