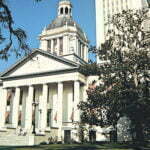 That’s why the section will be pursuing a bill in the 2022 legislative session to end Florida being one of only four states that has not passed the uniform act. If Florida passes the law, it would respect guardianships enacted in other states. Likewise, it would mean those other states would honor Florida guardianships.

Separately, the section is also working on a bill to help judges define undue influence in probate, guardianship, and other exploitation cases, but that is not expected to be ready until the 2023 session.

“Currently, our members have experienced  issues where we have a vulnerable adult who is a Florida resident [and under a guardianship] and then gets taken out of the jurisdiction to another state by a potential bad actor,” she said. “Because we don’t have the uniform act, the court in the other jurisdiction starts a new guardianship proceeding without consideration of the Florida resident’s home state or other connections to Florida.”

Section members also have had problems when people under guardianship legitimately move into or out of the state.

“We have problems when people try to transfer guardianships from other states into our state” and the transferring courts object due to Florida not having adopted the uniform act, Slater said. And likewise, Florida guardianships are not recognized when the wards move to other states, she said, citing a recent example where the ward moved to Colorado and the guardianship had to be reestablished from scratch.

“That’s not productive for anybody, and it creates undue delay and fees and costs for our wards,” Slater said.

Miller cited an example of another problem because Florida has not adopted the uniform act.

The parents of an adult child with developmental disabilities and for whom they were guardians took the child on vacation to Maine. While there, the child required hospitalization.

Because the Maine court did not recognize the Florida guardianship, the parents were unable to make medical decisions for their child.

“It can be very challenging,” Miller said.

The section is putting the finishing touches on its proposed legislation and working to line up sponsors. The Guardianship Improvement Task Force heard information about the Uniform Guardianship Jurisdiction Act, but did not make a recommendation.

It will be the fourth time the section has promoted the uniform guardianship effort, and Miller said the section plans to continue until successful.

“We think it will ultimately serve the interests of Floridians,” she said. “We like uniform guardianship, we think it’s time, and we don’t want to be behind in this process in adopting laws that benefit guardianships.”

Slater said the section continues to work on the undue influence issue with an eye to being ready for the 2023 legislative session. She said the section hopes to have the Legislature provide definition guidance for judges on what constitutes undue influence, something she said arises in guardianship, probate, and other types of cases.

“I’ve seen in guardianships when the aide had taken advantage of the ward,” Slater said. “In probate, we litigate over wills and trusts that people claim were executed under undue influence.

“We also deal with exploitation cases that are brought during the lifetimes of these people.”

She said the goal is not to provide an inflexible definition but rather guidance, noting there is no statutory definition in Florida.

“Other states have done what I consider to be a good job. Their undue influence definitions gave the courts direction and factors the court should be looking at, but they didn’t tie the courts’ hands by saying, ‘You have to’ or ‘You must,’” Slater said. “It would help determine whether the undue influence existed, but it also gave the courts flexibility that if they use other factors, that was fine.

“It gives the lawyers as well as the judges a step in the right direction.”