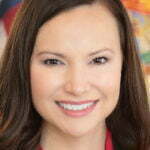 Attorney General Ashley Moody was one of a handful of political, industry, and academic leaders who headlined the Florida Chamber of Commerce’s “Future of Florida Forum” on October 27 in Orlando. The two-day annual event boasts more than 80 presenters.

Moody credited a 60% drop in index crime between 1989 and 2019 on “truth-in-sentencing” policies, prison reforms and the elimination of a parole system that “turned prison bars into revolving doors.”

“Tourism rose, Florida became a destination for families from all over the world,” she said. “I believe public safety is the cornerstone of a prosperous economy.”

“Cyber criminals are attacking our ports, our drinking water, our cities, our hospitals, our businesses,” she said. “In Florida, the stats are staggering.”

She cited a recent Florida Atlantic University study that estimated that Floridians lost $300 million last year to internet crime, with more than 50,000 victims losing an average of $6,000 each.

“In terms of victimization for internet crimes per 1 million population, Florida was the highest in the country,” Moody said.

Moody pledged to close what she described as a “gap” in cybercrime enforcement. Federal agencies focus on high-value targets, and local agencies lack the resources to pursue the rest, Moody said.

“That is why I have set up a cybercrime unit in my office, and we are seeking additional tools and resources and personnel, so that we can help local and state law enforcement agencies that don’t have the manpower or resources to go after cyber criminals,” she said.

“They often use juveniles to do their dirty work,” she said. “The effect on businesses in Florida and nationwide is in the billions.”

Moody said Florida is in a good place to ensure future economic success because it “operates under the rule of law.”