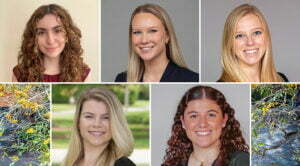 The editors-in-chief of all five law reviews at Miami Law are women for the first time.

“It is a testament of how our times are changing as more and more women are breaking the glass ceiling and inspiring others that through hard work and perseverance, anything can be achieved,” said Farah Barquero, director of programs who works closely with the law reviews. “I am sure these five wonderful women will continue to raise the bar for our law reviews, and I look forward to working with them.”

Originally from Coral Springs, Bokzam is a second-year law student with a concentration in the Business of Innovation, Law, and Technology. She graduated with honors from the University of Florida with a major in criminology and a minor in Arabic language and literature. As an intern for the Human Rights Clinic, Bokzam spent the last year working on projects to further racial justice and gender equality in the United States and advocating for a right to housing with various groups and organizations.

“I am so honored to have been elected editor-in-chief of the International and Comparative Law Review,” said Bokzam. “Seeing each law review elect a woman as editor-in-chief brings me so much pride and joy. The legal field has always been a boys’ club and I am excited to see this change as women take on more leadership roles within the law school and the legal profession. I am looking forward to working with the executive board in publishing our next volume and hopefully helping ICLR find its niche within the country.”

Born and raised in Tampa, Marquart received her undergraduate degree from Villanova University, majoring in sociology and economics. At Miami Law, she is involved in the Human Rights Clinic and works as a Writing Dean’s Fellow. She is also involved with the Human Rights Society and Miami Law Women. Marquart will be a summer associate with Hogan Lovells in Miami this summer.

“I am so honored to have been elected editor-in-chief of the University of Miami Law Review and I am so excited about the opportunity to work with all-women editor-in-chiefs,” said Marquart. “It is inspiring to see women in these significant leadership positions on campus and I am looking forward to seeing what all of our law reviews accomplish over the next year.”

Norris received her undergraduate degree from Emory University, where she majored in political science and psychology. At Miami Law, she is an intern at the Human Rights Clinic, a member of the Public Interest Leadership Board, and vice president of the Human Rights Society. Norris has served as a legal intern for Robert F. Kennedy Human Rights, an organization that advocates for human rights issues and pursues strategic litigation to hold governments accountable worldwide. She has also served as a judicial intern for Judge Stacey Schulman in the 17th Circuit.

“It is an amazing honor to be elected editor-in-chief by my peers, but an even greater one to be part of an all-women group of leaders,” said Norris. “This leadership is a wonderful opportunity to represent all Miami Law students and to take our law reviews to the next level. With the help of my e-board, I hope to continue to enhance UMBLR’s reputation as a resource dedicated to discussing important topics on emerging business issues, such as what it means to be a woman in the workplace.”

Rahaim grew up in Orlando and attended the University of Central Florida for her undergraduate degree in legal studies. She has served as a law clerk for Daniel Marquez’s law office in Miami. She has a golden retriever named Marley May and started her 200-hour yoga teacher training in the summer of 2020, and looks forward to working as a legal intern with Kurzban, Kurzban, Tetzeli & Pratt in Coral Gables this summer.

“As women, it is deeply ingrained in our psyche to be meek and only go for positions of power when we feel almost overqualified,” said Rahaim. “I hesitated to pursue the opportunity to be editor-in-chief because I thought, ‘who would want me to lead,’ and now I cannot wait to be another example for women coming to law school that it is possible, and that the legal world is ours too.

Miami native Vincent received her B.S. degree in criminology from Florida State University. At Miami Law, she is involved with the First-Generation Law Association and Miami Law Women. She has served as a law clerk for Meyer & Nunez, as a legal extern for the Miami-Dade State Attorney’s Office, and as a legal intern for the Broward Public Defender’s Office.

“Being named editor-in-chief of Race & Social Justice Law Review has been such an honor — I have learned so much throughout my year on law review so far, and I am very excited for the year ahead,” said Vincent. “Our journal’s goal is to bring awareness to social and legal issues that affect communities of color, as well as other communities that face social injustice daily. I am looking forward to expanding it in the upcoming year.

“Further, it’s an honor to be one of the five women leading the law reviews at Miami Law — it is truly a testament to the ones who had come before us and paved the way. This, along with Miami-native (and fellow Palmetto Senior High alum) Judge Ketanji Brown Jackson’s confirmation as the first Black woman to serve on the U.S. Supreme Court, is a reminder that, while we have made it a long way, there is still more to achieve and there are more glass ceilings to break!”

Michelle Valencia is the director of publications at University of Miami School of Law.