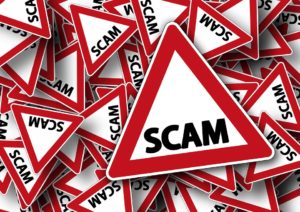 “I was looking at my credit report, and I saw the inquiry on Experian from the U.S. Small Business Administration, and when I contacted them, they said, ‘Oh, yeah, it was for $486,000.’”

The News agreed not to name the lawyer so the story can serve as a warning.

The application appears to have been for a COVID-19 Economic Injury Disaster Loan.

Using the lawyer’s identity, possibly purchased on the Dark Web, the criminals spun an imaginary business out of thin air.

“They stated that it was a construction company, and they made up numbers for the past two or three years, you know, balance sheet numbers, two employees, and they applied for this loan.”

A text and email alert from the lawyer’s identity theft protection service eventually led the lawyer to discover the loan application — and cancel it before any money changed hands.

But the lawyer’s path to discovering the loan wasn’t a straight line.

Along the way, the lawyer had to visit a local bank; call the Small Business Administration; file a federal Freedom of Information Act request; a Federal Trade Commission identity theft report; a local police report; and spend $60 notarizing forms.

The process began when the lawyer’s identity theft protection service texted and emailed a warning that two checking accounts had been opened in the lawyer’s name at a local bank.

The lawyer went to the bank, closed the empty accounts, and notified the identity theft subscription service. The service saw no reason to open an investigation, but suggested the lawyer notify the credit rating agencies, and freeze all reports.

“And so, I did, I called Experian, TransUnion, and Equifax, and I put a freeze, and I didn’t look at the reports,” the lawyer said.

A few weeks later, a letter arrived from a Texas bank.

“It says congratulations on opening a checking account,” the lawyer said. “It had the account number, and it said you have to fund it within three weeks, or it will be closed.”

The lawyer re-contacted the identity theft protection service, and with its help, began the process of closing the Texas account.

Because the identity theft protection service was initially unaware of the Texas account, the lawyer decided to look more closely at the frozen credit reports.

“I looked at Equifax and I looked at TransUnion first, and nothing was out of the ordinary,” the lawyer said. “On Experian though, there was a notation that on October 14, there was a credit check by the Small Business Administration for a loan.”

The lawyer contacted the SBA, got some of the details, and called the subscription service again.

“So, I contacted [the subscription service] and added it onto the Texas bank investigation claim, and I submitted an affidavit to the SBA, and the bank immediately . . . closed the loan application, and confirmed that it had been shut down and that there had been no transaction.”

The lawyer doesn’t know the source of the identity theft and suspects there may be more fake bank accounts.