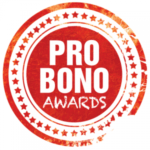 Pro bono publico means “for the public good,” and pro bono legal service is just one way that attorneys do their part to help make their communities better.

Every year, in a ceremonial session of the Florida Supreme Court, more than two dozen lawyers and judges are honored by the court and The Florida Bar for the free legal assistance they have provided. For each of these members of The Florida Bar, as well as a law firm and a voluntary bar association, this honor underscores a professional commitment to service and acknowledges the many hours of pro bono work performed to help children, victims of human trafficking, the elderly, refugees, the poor and countless others who wouldn’t be able to afford the legal assistance they so badly need.

The 2022 pro bono service awards ceremony will be held at the Florida Supreme Court at 3:30 p.m., Thursday, January 20.

The road to this annual ceremony begins now, with the call for nominations.

The Florida Bar and the Supreme Court invite nominations from legal aid groups, civic organizations, fellow lawyers, and regular citizens who know of a special lawyer, judge, law firm, or voluntary bar that has freely given of time and expertise in making legal services available to the poor.

Nominations must be received by October 8. Nomination forms are available at https://www.floridabar.org/ProBonoAwards for the following award categories:

Presented annually by the chief justice to a lawyer to recognize extraordinary contributions in ensuring the availability of legal services to the poor. Named for the late Miami civil rights lawyer Tobias Simon, the award represents the Supreme Court’s highest recognition of a private lawyer for pro bono service. All current recipients of The Florida Bar President’s Pro Bono Awards are considered for this prestigious award, as are direct nominees who have demonstrated exemplary pro bono service over the course of their careers.

This statewide award, presented by the chief justice, recognizes a law firm that has demonstrated a significant contribution in the provision of pro bono legal services to individuals or groups that cannot otherwise afford the services. This award recognizes extraordinary commitment on the part of a law firm to provide access to the courts for all Floridians.

Presented by the chief justice, this award recognizes a voluntary bar association that has demonstrated a significant contribution in the delivery of legal services on a pro bono basis to individuals or groups that cannot otherwise afford the services. This award recognizes an extraordinary commitment to provide access to the courts for all Floridians.

Presented by the chief justice, this award is given for outstanding and sustained service to the public, especially as it relates to support of pro bono legal services.

This award, presented by the chief justice, recognizes an active or retired federal judge for outstanding and sustained service to the public, whether through legal or civic service or a combination of them, especially as it relates to the support of pro bono legal services.

Nominees’ pro bono service contributions may be cumulative. Consideration is not limited to the events of the immediate past year. An award is also given to a young lawyer (all lawyers in good standing under age 36 and all new Florida Bar members of any age for their first five years in practice) by the Bar’s Young Lawyers Division, but nominations are now closed.

For additional information, contact Francisco Digon-Greer at The Florida Bar, 850-561-5793, or fdigon-greer@floridabar.org.